I demonstrated virtual reality at Automattic’s annual company Grand Meetup of +400 people over the course of a week. On some nights we went until 2am playing various games and experiences. Here’s my experience and what I learned during that week.

This was the largest room I’ve ever setup for VR. We had an HTC Vive and Oculus Rift with two computers. I gave the largest amount of space to the HTC Vive for its room-scale capabilities and controllers.

I made the mistake of getting Amazon Basic Tripods that did not extend high enough. If you have a large space, the lighthouses need to be placed very high up for the maximum amount of space covered by them. Luckily we had some tables I could use to put the tripods on top of. I went through several configurations of the room to get the most out of the space available and was able to get 4m x 3m in the end. While I could have pushed it further, it didn’t really make sense to go larger because the headset cables limited the distance someone could go anyway.

The cables were rarely an issue on the HTC Vive. A couple times a day someone would almost trip on the cable but normally the person would subconsciously move the cable while they were in VR. Often the wire would be in front instead of behind them which required some fixing but that’s about it. During room-scale setup it’s important that the step that requires to point to the monitor is actually pointed to where the linkbox is so for most games you get the cable in the back and allowing for greater walking distances and less of a cable mess.

I skipped using headphones at all for the HTC Vive. It was too much of a hassle handing that over to each person that was playing. It would have required that after they put on their headset for me to hand over the headphones. It’s too bad they skipped out on integrated headphones. On the plus side this made it a lot easier to explain what to do in-game rather than yelling into their headphones. It also made it slightly more interactive to be able to talk to the person. We had massive speakers for audio. I understand audio is an important aspect to feeling immersed but the convenience outweighed. 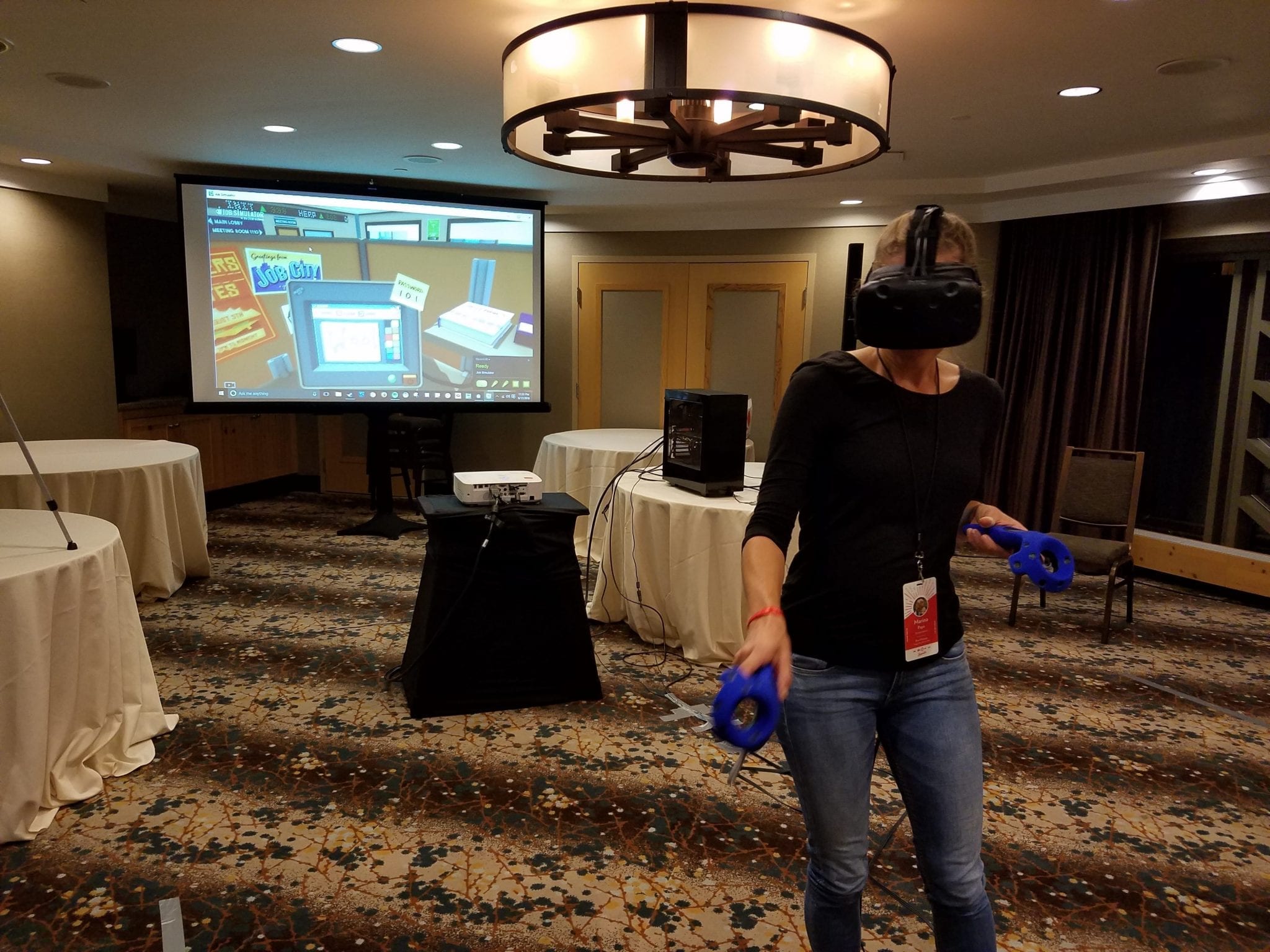 We had a large projection and many seats for the audience. This made it a fun interactive activity proving that VR is not just for the person in the headset. I put duct tape down on the floor where the room-scale was so people can comfortably walk around the area without worrying about being in the way.

The Oculus Rift was in the back and while it usually did not draw as much of an audience as the HTC Vive because of the setup I had, it was still great to have.

I printed out a signup sheet for both setups. It was one of the best things I could have done. The line was often long. Rather than just randomly asking who was next and everyone guessing, we could just check the sheet.

I also printed a general VR guide with bullet points on what to expect, how to use it, and some rules. A second sheet contained a table of all the games and experiences someone could try. It included my personal thoughts on the difficulty of the game, type of game, and short description. This helped get people an idea of what to play before they stepped up to the plate.

Here’s the sheet if you’d like to use it for your own event. 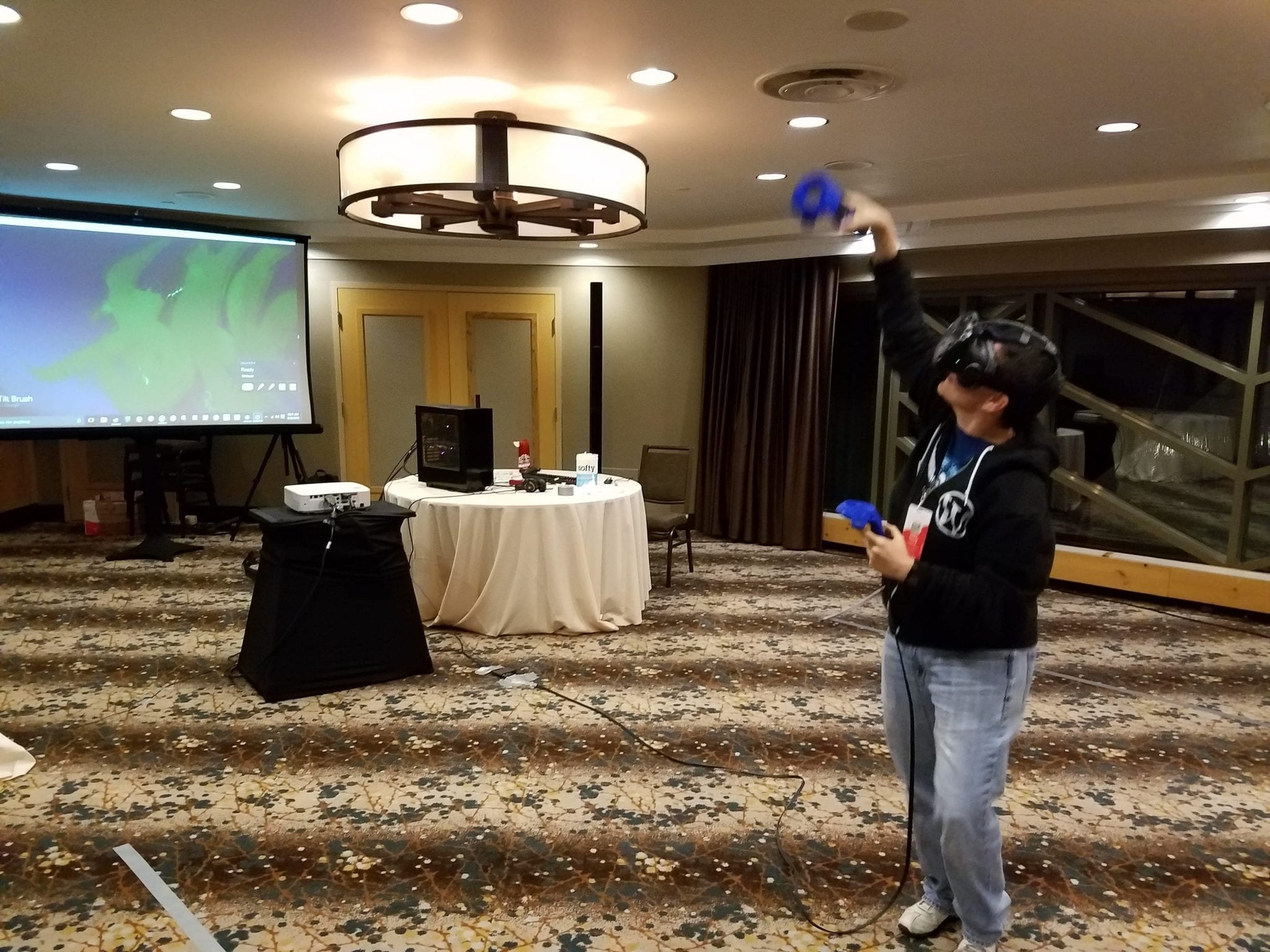