The rules of the subreddit are simple:

The most common rule that’s broken is #1. 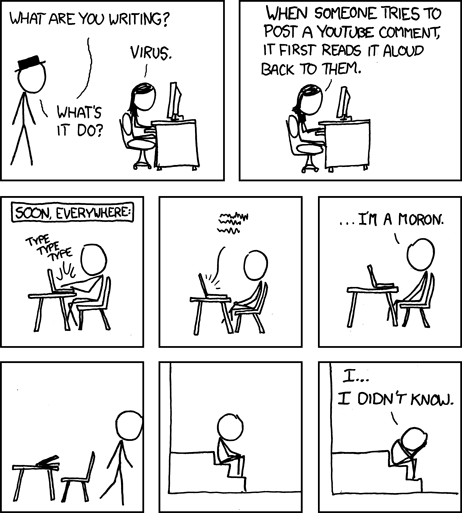 I’ve gotten a couple death threats and out of those two only one of them decided to track me down on Twitter and Facebook. That was a wakeup call that I’m not a moderator of a small community.

We have a moderator inbox called modmail where all discussions to the moderators of the subreddit go to. If you break any of the rules that requires the removal of a comment or ban, we message you with a short reason. This is seen by the whole moderator crew and any of us can respond in the modmail. It’s great for transparency and gives the other person the opportunity to discuss any issues.

Most people don’t bother to respond but a few fight back that their comment was legitimate and they don’t see why it was removed or fire back with more hate. Sometimes we get lucky and the person apologizes.

lmao it was clearly a joke. get over yourself.

OH NO FIRST AND LAST WARNING

please don’t do it

The modqueue is where all the reported posts go. Any reported in /r/Oculus will go to this queue and is human checked. Since it’s impossible to review all posts in the subreddit, it helps us when reports are issued. We also have a bot that auto moderates for certain flags (for example if you curse) then we can either remove or approve the post from there.

It’s never ending. There is always drama, a post that needs to be removed, or someone is really angry at us.

The most obnoxious argument I often hear is that we’re paid by Facebook or Oculus to moderate /r/Oculus and remove any positive mentions of HTC Vive (their competitor) or critical posts of Oculus. It’s obnoxious because moderating a major subreddit is not an easy task and can be very time consuming. It’s free work for very little reward. People think that we’ve somehow been brainwashed or seeking ultimate power over a subreddit community.

The mod team has a small Slack team where we talk about reported posts, whether we should ban someone, or casual discussions about what we’re video game playing. It’s a fun group and couldn’t have asked for a better team to work with.

So why do I do it? It’s because I’m a huge fan of virtual reality and enjoy working with the community. There’s plenty of really awful people but they are the minority. I truly believe virtual realty is the future and being a part of helping that grow is rewarding for me.