I learned that making pizza is an art on my first trip to Italy last year. It turned me into a pizza fanatic. I’m on a mission to learn how to make the best possible pizza.

I’ve made several attempts at making pizza’s and calzone’s in the US. I’ve looked up recipes for the best possible dough and created nearly everything from scratch. I ‘ve getting better at it but it still needs a lot of work. The most difficult part I found is working the dough. As a new pizza fanatic, I was excited to have the opportunity to learn how to make pizza in the country where it most of it started.

Usually when you see pictures from friends visiting Rome or anywhere in Italy, they’ll post pictures of a pizza that they ate in a restaurant. But have you ever seen pictures from someone cooking pizza while visiting Italy? I bet very few of you have! Walks of Italy gave us a food tour of Rome and part of the tour was on pizza making. 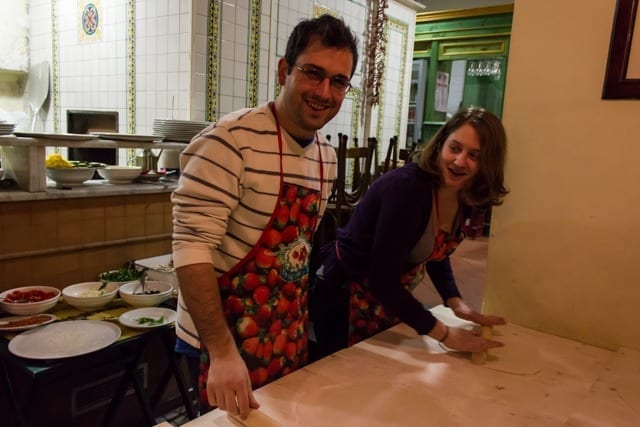 First a little history on pizza.

Pizza dates back as early as 977 AD but it wasn’t widely known. It wasn’t until the early 18th century that it started actually becoming the pizza we know today. So technically, pizza is really not all that old (at least compared to most of what Italy is known for).

Tomatos came to Europe from the Americas in the 16th century. This is going to sound hard to believe but the Europeans thought that tomatos were poisonous thus they were usually used like flowers, for decoration. One of the things I’ve learned in my travels is that the the poor people usually cooked the best newest dishes that are so commonly popular today and the same story holds true for pizza. By the 18th century in Naples, the poor started to add tomatos to their flat bread and the rest is history. The very first pizzeria still exists in Naples called Antica Pizzeria Port’Alba.

One of the most popular pizza’s in Italy is the Margherita. The story is that this pizza was made to represent the Italian flag in honor of the Queen consort, Margherita of Savoy with tomatoes, mozzarella cheese, and basil. There’s been a few times I’ve ordered a margherita and it did not contain basil. If the pizza doesn’t have basil, it’s not a margherita.

Each region and city in Italy makes their pizza different. For Rome, it’s all about making the thinnest possible pizza. Even thinner than NYC style pizza.

If you’re looking for good pizza in Italy, you need to go after 7PM. Wood-fire burning to make pizza is only allowed after 7PM. 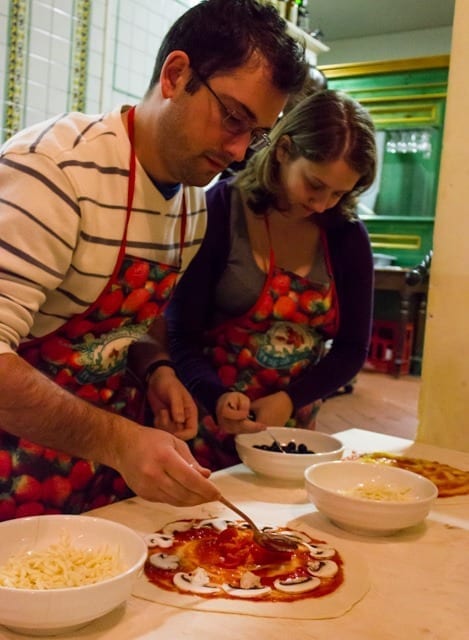 I laid out the dough and started rolling. The dough was so easy to work with. Just a few rolls and it started shaping up into a circle almost on its own. I wish the dough always cooperated with me like this.

The Italian philosophy to pizza is that less is more. The pizza should not be overflowing with any single ingredient and should have no more than about five toppings including the tomato and cheese. My toppings included tomato, mozzarella, mushrooms, and topped with a yellow pepper so I knew which pizza was mine in the group. 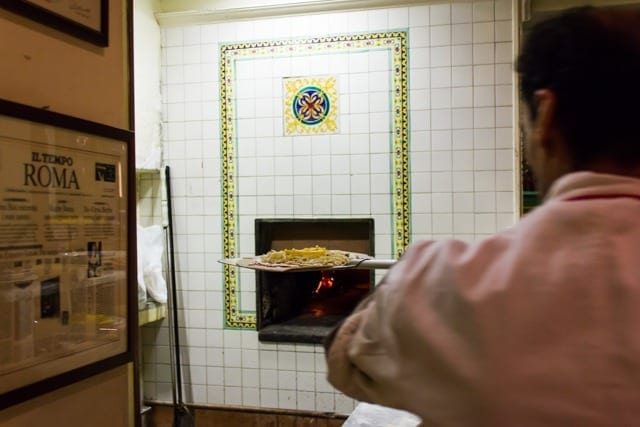 In Italy, it’s common to order a whole pie for yourself. The pizza is usually thin so you don’t have to feel guilty about eating the whole thing. I don’t know why they do this but every time I’ve ordered pizza in Italy, it’s always bigger than the plate. It makes it difficult to cut without the pizza shifting off the plate so most people start eating from the center or on the sides to get into the middle. 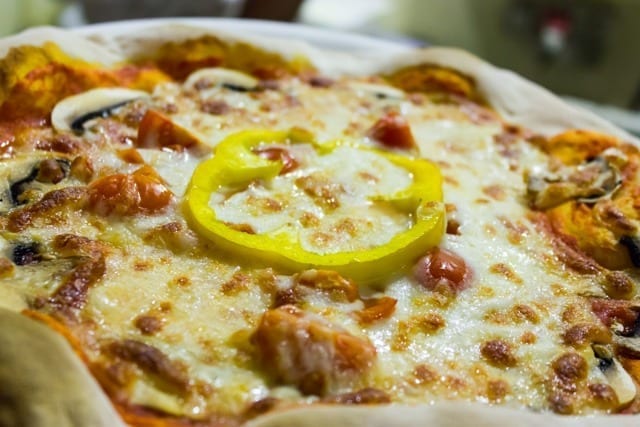 Verdict? One of the best pizza’s I had in Italy. Now to take what I learned and do it at home.

[disclosure]Disclosure: I was provided a comped tour for review. All opinions are my own[/disclosure]