Today’s post is a special one. This one is coming from my 14 year old brother. We took a road trip to Montreal and Quebec City for a week and did a lot of awesome actives including canoeing. I wrote about our experience from my view on how I helped him conquer his fears. He had to write an essay for school and he choose to write about his experience. I asked him if it would be okay to publish his essay here and he said absolutely. 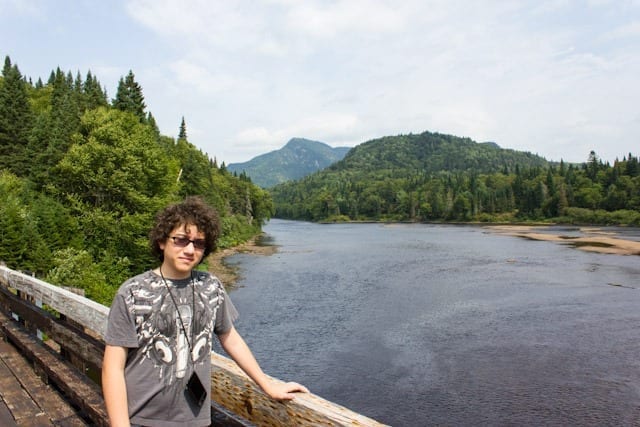 The day was warm and rainy and my brother and I were in Canada for vacation in August. For our last two days in Canada we wanted to go canoeing. This has not been the first time he went canoeing but, it was for me. We were in the van while the driver was taking us to the starting area of the river. My brother told me it would be easy and I would be longing to go again when we were finished.

We had a lot of trouble just climbing into the canoe. For example, every time we tried stepping into the canoe, it would almost flip over. We needed help from other people to climb in. We finally sailed off and began padding. There were others canoeing and we pretended as if it were a race. The first rapid was approaching, and I was very terrified. My brother said to start paddling as hard as I could, however we hit a lot rocks and flipped over. We rammed right into a wall of rocks and the boat turned completely lop-sided. I felt a mixture of excitement and mortal terror, mostly terror. But, we weren’t the only ones that were flipping over. It started to rain heavily and our boat and paddles were floating away.

We finally flipped the canoe right side up and jumped into it with our paddles. I was soaking wet just standing in the middle of the rapids. I was shocked I was still alive. We were fairly behind, but we eventually caught up with the rest. By this time, it started to get dark outside and we were not sure how much further we had to go. We finally were able to get the hang of it. I remember at one point of the journey, we had to pull to the side because the rapids were extremely dangerous, as in it could be fatal. As we were ending our adventure, I felt relieved that I achieved something that I thought I couldn’t do. The entire ride was approximately two hours. As we were heading back to the hotel, I was almost anxious to do it again.