Venice has had it rough the last few years. As I was doing research for this article, I found that people have been writing about the overflow of tourism to Venice for a long time. You can find articles on the death of Venice, restricting the number of tourist, can Venice save itself from its own popularity, and more as far back as 2007. It seems to have only gotten worse too.

I have a confession to make. I was fined €200 because I am an idiot. More accurately, I was preparing a quick sandwich to eat while I was at St. Mark’s Square. I was an easy target as I was eating right in front of the police station. I didn’t know but it makes perfect sense looking back at it why it was forbidden. I thought I was being smart by bringing my own food because I knew the food in Venice was expensive. This does not apply to the restaurants on the square.

I’ve been telling people this story and I found that it’s easy for others to dismiss it and say they were only looking for money but the number of tourists during my visit felt overwhelming. UNESCO World Heritage says this may in the future have a serious negative impact. It’s clearly a problem and the local government and several foundations are trying to manage it. Shortly after my fine, I saw an entire school group eating a to-go pasta cup at Piazzetta dei Leoncini (where it’s forbidden) while a pigeon was eating their leftovers.

There are signs as you exit the train station that say #EnjoyRespectVenezia. I loved that such a campaign existed but I had not heard about it before arriving. I figured it was most of the obvious things like don’t litter and did not notice signs anywhere else, including in St. Mark’s Square.

#EnjoyRespectVenezia is the City of Venice’s awareness campaign launched during the International Year of Sustainable Tourism for Development and designed to direct visitors towards the adoption of responsible and respectful behaviour towards the environment, landscape, artistic beauties and identity of Venice and its inhabitants. The objective is to raise awareness of tourist impact, with the belief that responsible travelling can contribute to sustainable development.

The campaign started sometime last year and includes new rules for Venice like no eating at St. Mark’s Square.

Heads up if you’re visiting Venice, be sure to read the rules before you go. Also use their Tourism Report for the best day to go. 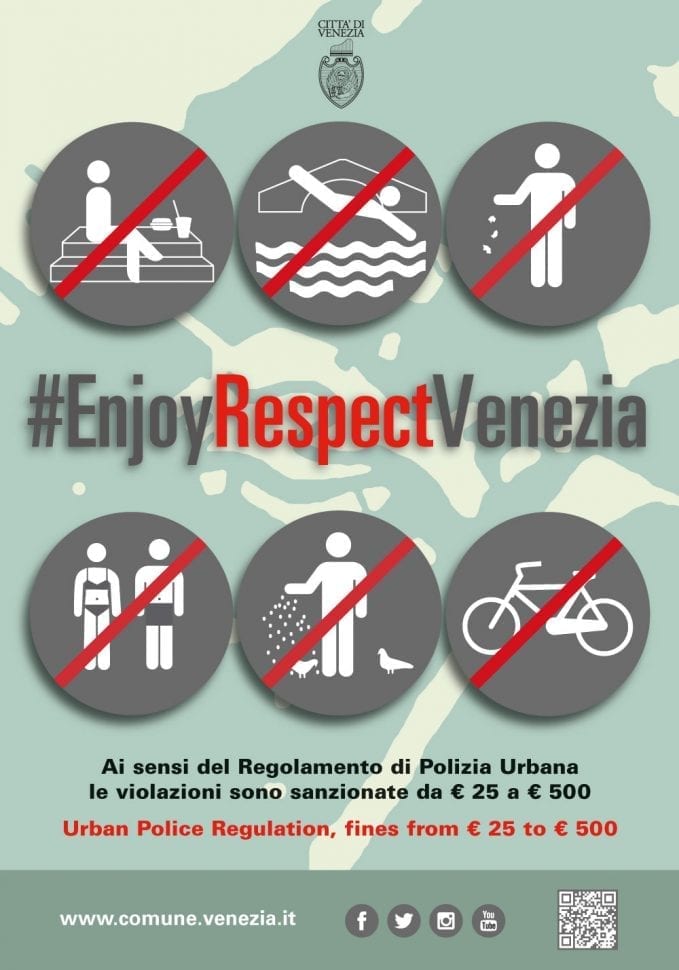